Inflationary Pressures on the Property and Casualty Insurance Industry

This blog was developed from research and a presentation conducted as part of Pinnacle University 2022.

There was arguably no bigger economic story in 2022 than inflation. Throughout the year, inflation remained a hot topic in the news, and American consumers continue to see price increases in energy bills, gas prices, rent or mortgage payments, and grocery products.

Several factors have been attributed to the current rise in inflation – one has been the COVID-19 pandemic. To respond to the economic shutdown caused by the pandemic, the government allocated trillions of dollars for the CARES Act, American Rescue Plan and assistance for small businesses. In addition, the Federal Open Market Committee (FOMC) lowered the Fed Funds Target Rate to 0 to 1/4 percent. It also increased its holdings of Treasury and agency mortgage-backed securities and continued to purchase “in the amounts needed[2].” This provided sources of liquidity and resulted in the flow of credit to the broader economy.

Other contributing factors included a supply chain crisis arising from shipping bottlenecks, worker shortages and other disruptions, and the Russian invasion of its neighbor Ukraine (which caused global increases in the prices of oil and commodities). These stressors caused prices to rise as too many dollars pursued too few goods.

Inflation in the short term can be a positive for an economy, incentivizing spending and investment. If consumers anticipate higher prices, they may decide to make purchases sooner rather than later. Further, when interest rates are near zero, keeping money in a savings account is theoretically losing money – so one of the best ways to hedge against inflation is through investments, such as the stock market or real estate, where returns can outpace the rate of inflation.

However, as inflation lingers on, the purchasing power of money erodes, leaving consumers with less discretionary income. In fact, American households have recently seen the steepest inflation in four decades[3], and are certainly feeling the negative effects.

Clearly, inflation has drastic effects on consumers and producers, but how does it affect the pricing of policies for insurance companies?

For insurers, inflation impacts the pricing and reserving of their liabilities. Over the past few years, the price of lumber and other building materials increased, leading to higher home prices, increased homeowner premiums and higher costs to the insurer.

In the auto industry, inflation due to supply chain and chip shortages has increased the price of car repairs, replacements and rentals. There has also been an increase in the price of new and used cars. These increases are leading many auto insurers to increase their premiums and raise rates. Higher costs have also been reflected in insurer payments for totaled vehicles.

During high inflationary periods, insurers need to adjust rates properly and shorten policy terms to reflect unexpected inflation, as well as allocate more company resources towards the pricing department. Insurance companies also need to be aware of the regulatory environment when raising rates to adjust for higher costs caused by inflation. In the U.S., companies need to file rates through the state before using them, which can be a time-consuming process.

For reserving, if inflation is higher than the rate built into loss reserves, then future payments will be greater than expected. A rise in the inflation rate will increase losses on claims already incurred. These increases in higher costs could lead to significant adverse development on older claims.

Inflation impacts lines of coverages differently. For short-tailed lines of business, claims are known and estimated in a fairly short period of time. Since payouts on these claims tend to be shorter, there is a lower risk that the insurer will underestimate their reserve estimates.

For long-tailed lines of business, since claims may take years to be known or resolved, the length of time for payments is increased. The increase in claims costs and length of time for payouts can cause an insurer to undertake significant risk in under-reserving for their current claims. If an insurer under-reserves due to inflationary cost changes, they may not have enough funds on hand to pay for claims with unexpected adverse development. The understatement of future claim payments can be even more severe than short-tailed lines which often results in significantly inadequate future rates and premiums.

An increase in loss payments from the insurer will also occur. If the deductible amount stays the same, while inflation is causing losses to increase, the deductible becomes less effective, as it is eliminating fewer losses.

For example, with a $1,000 deductible, an accident resulting in $1,000 damages would lead to the insurer paying nothing on this claim, as the deductible would cover it. With 10% inflation, that $1,000 loss now becomes $1,100, and the insurer now must make a payment of $100. If the deductible amount were to increase, the impacts of inflation would be even greater. This is similar to policy limits, as inflation impacts higher layers more severely. 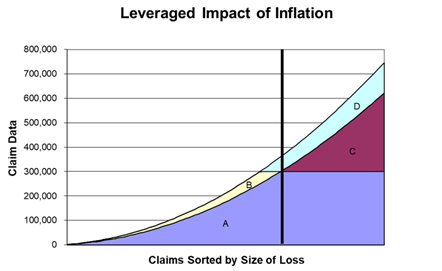 Notice that more claims are appearing in the excess layer. The graph also shows that Section C grew more from inflation than did Section A. This is the leveraged impact of inflation, as inflation is intensified in higher layers of insurance.

There are several causes cited for nuclear verdicts. One hypothesized cause is the changing views of jurors and society, resulting in cases being used to right a wrong rather than an adjudication based on facts. Capitalizing on that trend, some plaintiff attorneys have adjusted their strategies to foster a jury’s sense of obligation and focusing on invoking emotions, rather than relying on objective details of a case.

Looking at this from an insurer’s perspective, what issues does social inflation bring about, besides an increase in premiums?

In an industry so dependent on consistency and past results, an unpredictable and difficult-to-measure factor such as social inflation causes problems, even if the current trend continues a pointedly upward rise in cases. For example, Advisen, a data provider who uses loss data from a wide variety of public sources, found the median costs of single-fatality accidents and sexual discrimination and harassment cases between 2003 and 2019 have increased by 142% and 226%, respectively[4].

Where Are We Going?

Although it is difficult to predict where economic and social inflation may be going, it is fair to assume that it will linger for a time before it subsides to healthy levels. Until then, we remain in a period of great uncertainty and the need for quick adaptations for individuals and businesses. For insurers, this will be no different.

To begin, premiums will have to rise to make up for past and future losses that are larger than expected. Further, common deterrents such as deductibles will prove less effective in reducing claim counts. Also, policy terms will likely shorten as much as regulations allow, due to the unpredictable landscape of long-term inflation. Another probable issue is the prospect of more large losses, which will impact excess layers and may put further strain on the insurance industry.

Until inflation does subside, insurance companies will face many challenges that have not been seen for decades, and extra precautions will need to be taken.

More information about the authors:

Paige Bailey is an actuarial analyst 2 with Pinnacle Actuarial Resources working remotely from Austin, Texas. She holds a Bachelor of Science degree in actuarial science with a minor in economics from Illinois State University, and has experience in assignments involving loss reserving, loss cost projections and group captives. She is actively pursuing membership in the CAS through the examination process.

Amanda Conklin is an associate actuary with Pinnacle Actuarial Resources in the Bloomington office.

Muin Shahin joined Pinnacle Actuarial Resources at the end of the summer of 2022 as an actuarial analyst 1. He holds a Bachelor of Science degree in mathematics from the Hashemite University, and has experience in assignments involving predictive analytics, captive loss reserving, insurance product development, state filings and regulatory compliance. He is actively pursuing membership in the Casualty Actuarial Society (CAS) through the examination process.

Luke Stees is an actuarial analyst 1 with Pinnacle Actuarial Resources in the Chicago office. He holds a Bachelor of Science degree in actuarial science and statistics from the University of Illinois at Urbana/Champaign, and has experience in assignments involving predictive analytics, microcaptive loss reserving and loss funding. He is actively pursuing membership in the CAS through the examination process.

The Value of Captive Domiciles

Discussing one of the most important decisions when forming a captive insurance company.
Read Now 3 minutes
Blog Post

The Risky Business of Social Media